My first book launch was held at the Takapau RSA clubrooms at 5.30 pm on the 11th March 2016. I must admit I was a bit nervous, but everything was ready for the big event.

My family had come from far and wide to be with Kaye and I and in retrospect that was the nicest part of it all. I'm so very lucky to have a daughter who's an illustrator, she designed the book cover for me, giving it a professional look and with persuasion, she'll create the covers of the other two books in the trilogy.

Takapau has a population of 400 people, and I knew it wasn’t going to be a big crowd but in the end, 10% of the population turned up. I was thrilled. The RSA had put on nibbles, and there was a bar tab and wine for anyone that wanted one. Christel Price was the representative of the company Lang Book Publishing, and ran a very smooth launch.

The books and signs were displayed on the table by my daughter, and it all looked polished, to say the least. My granddaughter, daughter, and son took photo's and videos of the occasion for me. Lots of signing books, taking photos and answering questions took place. The guests bought over 20 books, and it turned out to be a very successful launch of my book “Whispers of the Past”.

Overall it was an exciting afternoon; I met more locals, one of the council members turned up, and everyone was very supportive. So now the hard part of keeping the momentum going. It will be interesting to see how the book appeals to the public eye.

“Whispers of the Past” is the first book of a trilogy complete within itself, as are the other two. “Shadows of the Mind” will be out next year and the last of the series “Clearing of the Mist” the year after.

My first book tells the story about three modern blokes who on a culling trip for the Department of Conservation in 2015 end up slipping back in time while in a storm with a difference. They end up in New Zealand in an entirely different place from where they started, back in the year of 1863. This book is about how they cope when they realise where they are and the driving force to get back to their own time. It was a turbulent time in New Zealand History as they arrived in the past a few months before the start of the New Zealand wars in the Waikato.

Don't forget you can purchase “Whispers of the Past” through me, and of course I will sign it especially for you. Also, it's available from the publisher, Lang Book Publishing, Wellington, New Zealand. As well as that, Paper Plus, Take Note, and some independent bookshops in New Zealand have it. It's also available throughout the world in paperback, look at The Book Depository UK, or Wordery for free delivery worldwide. Other suppliers are Barnes and Noble USA/Canada, Abbey's Bookshop, Amazon, Angus & Robertson, Fishpond, and Booktopia Australia.. For eBooks go to Amazon, Kobo, Barnes and Noble, and Goodreads.

Whispers Of The Past Book Tour. 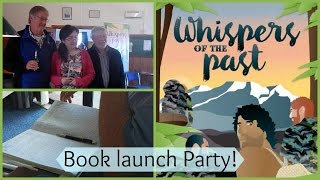 Shadows of the Mind- OUT NOW!